by Will Llamas and the TLS Team

“Why should I eat healthy when I can get more calories for the money?” In our struggling economy, this question has been a no brainer for most people. On a calorie basis, most unhealthy food is much cheaper than their healthy alternative.

But price per calorie is not the beat way to gauge the price of food, especially since most people are not lacking in calories. In fact, the cost of food depends completely on the way you measure the price. Recently, the Department of Agriculture held a conference to explain the results of an interesting study conducted on the price of food.

The study, led by author Andrea Carlson from the USDA’s Economic Research Service, computed the price of food using three different methods. The first was the traditional but flawed price per calorie system. The second was price per edible weight, which uses the weight of the food after all preparation, is done. The last was price per average amount eaten, meaning the amount of a specific food that people actually eat.

So, don’t be afraid to ditch the price per calorie method as you calculate the price of food next time your at the supermarket. By choosing the right foods, you can always find a way to eat healthy while spending less.

By Will Llamas and the TLS Team What do summer and weight-loss have in common? Everything. Summer is the perfect time to get slim and… 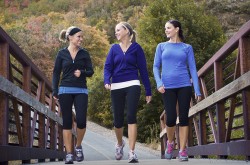 Workout Playlist: Walk It Off

The summer is filled with celebrations, cooking on the grill and vacations with family or friends. Unfortunately, this can also lead to not paying attention…

Turn Up Your Workout with These Hot Hits

Exercising getting a little bland? Turn it up a notch with some tunes! Many claim that it helps them power through a workout, and provides…