Women have a lot of expectations from the media to stay thin, but so do men. Do men experience insecurities about their bodies and their weight? Absolutely. In our society, it’s often less socially warranted for them to talk about it. That’s part of the problem.

In Dr. Harrison Pope Jr.’s book, The Adonis Complex, he claims “Real men aren’t supposed to whine about their looks; they’re not even supposed to worry about such things. And so this “feeling and talking taboo” adds insult to injury: to a degree unprecedented in history, men are being made to feel more and more inadequate about how they look while simultaneously being prohibited from talking about it or even admitting it to themselves.”  Many men are hesitant to look for help because of the social stigma of the health market.

1) Healthy Food Is Only Marketed To Women

Until recently, “diet” has been pigeonholed as a lady thing.  In fact, all health foods started being marketed to women only. From Salads to  yogurt, these health foods have all been claimed by women’s advertising.

Do men eat yogurt? Of course they do. According to marketers, men can only feel entitled to eat yogurt if it’s marketed in a manly way:

Somewhere along the way, it became less and less socially acceptable for men to eat real food and it is fundamentally dangerous to the health and wellbeing of men everywhere.  Right now, heart disease is the number one killer of men and women. It is estimated that 1 out of every 2 women will die from heart disease. However, men with heart disease will likely die 7 years sooner than women with heart disease. These bleak statistics make it clearer than ever that we can’t marginalize eating right.

If it’s processed, “extreme”, red meat, or some variation of bacon, chances are, Gents, marketers have you in their sights. From SlimJim to Epic Meal Time, advertisers decided they could market the antithesis of health foods to men.

Eating a diet of only red meat and fried food doesn’t make you manlier- it makes you more likely to suffer a massive coronary. It’s a huge disservice to men everywhere to let advertisers insult their masculinity because they eat balanced meals.

On average, they only need additional 100-200 daily calories more than a woman to make up for the difference in body frame. Meanwhile, every fast food restaurant is telling men everywhere they should be eating super sized meals to handle their “Man-sized” hunger.  From triple Decker hamburgers covered in cheese and bacon to plates of food twice as big as your head, advertisers have tried it all- and it’s working. For men who have made “Man-sized” meals their daily mantra, they may be eating an extra day’s worth of food every day, and that adds up. Fast.  If you’re eating past the point of feeling satiated, you’re eating too much.  Taking responsibility for your health and knowing your limits is a much larger accomplishment than cleaning your plate.

Which health trends have you noticed lately? 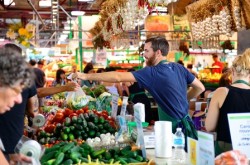 Support Your Health — and Your Local Community!

Shopping at a Farmers Market gives you access to fresh, locally grown foods that are available at the peak of the growing season. Besides the…

6 Steps to Feeling Younger Inside and Out

By Kerri Whatley and the TLS Team You have no interest in being 21 again, but, oh, wouldn’t it be nice tofeel 21 again: The…

By: Amanda Belo  According to a 2015 study, people who use exercise apps are more likely than those who do not to exercise during their…