Your Low-Glycemic Guide to Alcoholic Beverages

Your Low-Glycemic Guide to Alcoholic Beverages

When so few alcoholic beverages are properly labeled with nutritional facts, it’s incredibly hard to keep a thumb on exactly what we’re putting into our bodies when we go out for a night on the town, go out to eat, or even indulge in a glass of our favorite spirits. A low-glycemic diet doesn’t mean you can’t ever enjoy an adult beverage, but it’s important to know how to choose your drinks wisely- especially around the holidays and New Years. Here’s a helpful rundown to help you think out your next drink a little more carefully:

Not All Beers Are Created Equal In medieval Eastern Europe, fresh bread would often mold within in a day due to high moisture levels in the air. However, distilling and fermenting grains and making beer became the ideal way to preserve and consume grain. It’s no secret that beer is derived from malted grains. Wheat, rye, barely, hops… beer is quite literally liquid bread.
IPAs, hefeweissens, and Belgian wheat beers (like Blue Moon) are the densest in calories and carbs.  Dogfish Head Microbrewery released their high gravity 90-minute IPA with a whopping 294 calories and 19.93 carbs in every bottle. Heavier beers, like stouts and porters consistently have 180-250 calories per bottle. When choosing your beer, you have to ask yourself if you really want to be casually drinking your allotment of simple carbohydrates in a single serving.

The higher alcohol by volume (ABV) a beer has, the higher the carbs and the calories. For those high-gravity beers, breweries had to ferment and distill nearly 3x more grain and hops for not only flavor, but alcohol content; this means more calories, more carbs, and more sugars for your body to break down. These beers pack a mighty punch, but it’s important to drink them in moderation.

Love them or hate them, many American pilsners are lower calorie because they are made with more water than other beers typically are. Domestic breweries (Budweiser, Miller, Pabst) began adding less grain to their recipes during the Great Depression to save money and foodstuffs. In the several decades it took for the economy to recover, Americans had adapted to the flavor of American pilsners, and the recipe lives on today.  Light beers like Budweiser Select, Miller Light, or Michelob Ultra have fewer calories and about half as many carbs as a regular beer while still maintaining a 4-5% ABV.

Making a shandy is also an option for people watching their weight- A shandy is a beverage made of half a glass of beer, and half a glass of a citrus-flavored soda, lemonade, or seltzer. This way, the beer is watered down and provides slightly less calories.

Many find it very easy to pace themselves while drinking wine because the culture of wine is all about taking the time to appreciate subtle nuisances in flavor and aroma as well as fully enjoying the company and meal partnering your glass. As one might guess, there are plenty of advantages to eating and drinking more slowly and fully engaging your friends, family, and palate.

The average 5 oz glass of red or white wine has between 118-128 calories in it.  Red wines, especially, hold anti-oxidative properties which offer a slew of health benefits. Unsurprisingly, sweeter wines like Riesling or Port have more carbohydrates and sugars than dryer wines, like Cabernet Sauvignon or Chardonnay.  The dryer New Year’s Favorite, Champagne, has about 91 calories per glass and only 1.2 g of carbohydrates (just in case you were curious!)

You can tell if a wine has a high sugar content depending how viscous the residue of your wine is on the side of the glass. Dryer, less-sweet wines won’t leave much behind, but wines with high residual sugars will leave a thicker syrupy finish behind.  Many people also add seltzer to their wine to make spritzers, which can also help them pace themselves a bit better. What you have to understand about liquor is the fact it’s derived from fermenting different mashes and starches. Vodka is made by distilling potatoes. Whiskey is derived from rye grain. Rum is actually distilled from sugar cane. Even though a typical bar serving of alcohol is one jigger (approximately 1.4oz), each shot is around 100 calories.

Unless you’re enjoying your favorite liquor straight or over ice, chances are you’re adding a mixer of sorts to enhance the flavor of your drink, which is where the calories can really pile up. Mixers like juice usually have as many calories and grams of sugar as a soda, and depending on how much you’re adding to mask the flavor of your drink, you could be doing yourself a real disservice. Tonic and seltzer are of course fantastic mixers for low-glycemic results, but they do little to mask the flavor of alcohol.  A gin and tonic flavored with a twist of lime juice is a perfect example of a low-glycemic drink (as long as you enjoy them in moderation).

Sake, a Japanese rice wine, has only 19 calories per serving, has an ABV of between 18-21% and less than 1 gram of carbohydrates per serving. Sake is usually served in a very small glass similar in size to a shot glass, and the sake (served cold or hot), is sipped like liquor.

Liqueurs tend to have lots of sweeteners, crèmes, and food dye added, blowing their glycemic index through the roof. Yes, that’s what makes them so delicious, but be aware they can be denser in fat, sugar, and carbs than some desserts. Think twice before reaching for that mudslide or flavored martini…

Alcohol is never as filling as a meal, so please don’t try to balance your calories by skipping a meal and suffering for it later. Remember that alcohol not only has empty calories, a lot of carbs and sugar alcohols that can spike your blood sugar,  but more importantly, it can make you lose your inhibitions about snacking or overeating.

This holiday season, eat, drink, and be merry- just be smart about it!

Fiber is essential in maintaining a not only a healthy lifestyle but a healthy weight, too! It adds bulk to help you feel full without…

What to Look for When Buying Microwave Dinners

Always in a rush? For most, the answer is YES, which makes finding the time to prepare a healthy meal difficult. When you’re hungry and… 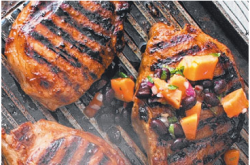 By Kerri Whatley and the TLS Team In the middle of summer, there simply isn’t any excuse not to go outside and grill food. Grilling…